This blog summarizes techniques that have been revealed in publications in convolutional neural networks. The focus of this summary will be put on the terminologies and their influences. Related technics will not be explained in detail, for some algorithms, I may wrote other standalone articles to explain how they work.
Allow me to issue some abberviations, “conv.” means “convolution“, “op.” means operation, these two words appear too frequently.

The related paper is : Gradient-Based Learning Applied to Document Recognition, released in 1998.

This concept raised in two reference papers of this paper. In a gradient-based machine learning, there is:

(E_test:test set error) - (E_training: training set error) = (k: a constant) x ((h: a measure of effective capacity)/(P: size of training set)) ^ (α： a number between 0.5 and 1)
The gap between test error and training error will always decrease when the number of training samples increase. The increasing of the capacity h, training error will decrease, the gap will be larger.
To my understanding, this formula wants to issue, during the training process, the more data the better. But the capacity of the weights is not the wider the better, there should be some constrains on the weights’ parameter space in order to avoid overfitting and loss of the generalization of the network.

In order to control the range of the network’s weights, they introduced the regularization function.

Not counting the input, LeNet-5 comprises 7 layers. Input image is 32x32 pixel image with a character on it. The largest character in database is at most 20x20 and the original image is 28x28. The reason to enlarge the size of the image is described as:

“It is desirable that potential distinctive features such as stroke end-points or corner can appear in the center of the receptive field of the highest-level feature detectors.”

Using unsupervised learning, an autoencoder, to extract high-level object features from large scale image dataset. Apply the unsupervised network as the initialization of the supervised learning network, training on 22000 classes ImageNet dataset, achieved 15.8% accuracy (70% relative improvement over the state-of-the-art at that time, the random guess accuracy is less than 0.005%).

Training dataset contains 10 million images from 10 million YouTube videos(each video contributes only one). Each example is a color image with size 200x200 pixels.
The model is a deep autoencoder with pooling and local contrast normalization. During training, asynchronous SGD is employed, training is distributed among a cluster with 16,000 cores for three days.
The idea of this unsupervised architecture comes from a neuroscientific conjecture that there exist highly class-specific neurons in the human brain named “grandmother neurons”, it means that a baby learns to group faces into one class because it has seen many of them without specific guidance.

To normalize a layer’s outputs. For detail, please visit another blog: Normalizations in neural networks.

ILSVRC-2010 uses subset of ImageNet data set with roughly 1,000 RGB images in each of 1,000 categories. Roughly 1.2 million training images, 50,000 validation images, and 150,000 testing images. Test set labels are available.
ILSVRC-2012 competition, the test set label is unavailable.
The images were down sampled to 256x256 pixels. For each image, first rescaled the image according to the shorter side, let the short side has the length of 256, then cropped out the central 256x256 patch from the rescaled image. Before feeding the images to the network, each pixel subtracts the mean pixel value of the whole data set.

An activation function to replace sigmoid function or tanh function. The function is:

Raised to normalize the weights of the CNN. at the same layer. For detail, please visit another blog: Normalizations in neural networks.
The author claims that by using LRN, top-1 and top-5 error rates were reduced by 1.4% and 1.2% respectively for ImageNet classification, besides, for a four-layer CNN, they achieved a 13% test error rate without LRN and 11% with LRN.

In AlexNet, they set s = 2, z = 3. This pooling scheme is adopted throughout the network, and comparing to s = 2, z = 2, this scheme reduces the top-1 and top-5 error rates by 0.4% and 0.3% respectively.
They also issue that overlapping pooling network is a little bit more difficult to overfit.

Ironically, what has been described above doesn’t match the paper’s figure. If anybody see this, please be noted that there’s something wrong with that paper.
I tried to analysis all the architecture parameters in that paper and found that almost all the given value cannot be understood by conventional method.
If you are interested, please to go this page (released by Stanford), and ctrl + f to search 224 in that page, there’s another illustration on AlexNet. An additional proof of padding can be found at tensorflow‘s AlexNet implementation.

Data Augmentation is adopted, first is a random crop 224x224x3 image from a 256x256x3 image, this method increases the data set by a factor of 2048, second thing is to apply a RGB intensities altering based on PCA (Principle Component Analysis), the idea is to enhance principle property (with randomness) of the image. This method reduces the top-1 error rate by over 1%.
Drop out is adopted.During the training, setting to zero the output of each hidden neuron with probability 0.5, by changing the connectivity of the network to reduce the overfitting problem. The other side of drop out is that it almost doubled the iterations required to converge.
Backpropagation parameters, SGD weight decay is 0.0005, batch size is 128, momentum is 0.9, initial learning rate is 0.01, reduce three time (by the factor of 0.1, when the validation result doesn’t change, manually adjust the learning rate) before training finished, they trained the network about 90 cycles over 1.2 million images.
Initialization, weights in each layer was initialized by zero-mean Gaussian distribution with standard deviation 0.01. Biases besides the first convolutional layer (initialized by 0) are initialized by a constant 1, it can help to accelerate the early stages of learning by providing ReLUs with positive inputs.

Related paper is: Going deeper with convolutions, published in 2014.

Data set is ILSVRC 2014 challenge data set, it contains 1,000 categories. 1.2 million images for training, 50,000 for validation and 100,000 for testing.
For each image, resize the image according to the short edge with the length of 256, 288, 320, 352. Then, take the left ,center and right square of these resized images(top, center and down for portrait images). For each square, take the 4 corners and center 224x224 crop as well as the square resized to 224x224 and their mirrored version. So, each image in the data set will generate 4x3x6x2 = 144 training images.
So the input image of the network is a 224x224x3 image. Extract mean before feeding the training image to the network.

Inception architecture is a very interesting design. The conventional CNN usually convolute on a fixed size over the whole image. Inception architecture has a multi-scale convolutional structure. Different convolutional kernel sizes are adopted by the inception unit. In the article, they use 1x1 convolution kernel, 3x3 convolution kernel and 5x5 conventional kernel to convolute over feature maps, generating the same size output feature maps, then concatenate the outputs as the input of the next layer.

The 1x1 convolution has the effect of dimension reduction. Let’s say you have 56x56x64 feature maps, and you think 64 is too large, then you maybe consider to use 32 1x1x64 filters to convolute over your feature maps, the output will be 56x56x32, the dimension of the output is reduced by a factor of 2. If you still think it’s odd, think about RGB to gray scale image conversion(another name is RGB to Y), the difference is that the RGB to gray conversion’s filter is fixed (Gray = 0.2989 x R + 0.5870 x G + 0.1140 x B), but in the CNN, dimension reduction’s filter will be adjusted during the training process. And of course there will be some information loss during the reduction.

GoogLeNet, comparing with the above architectures, is quite complex.
The first convolutional layer is a layer with 64 output feature maps. Convolution kernel size is 7x7x3 with step 2. Input image is 224x224x3 (with padding 3 I believe), the output feature is 112x112x64. Then ReLU and max pooling by 3x3 kernel with step 2, now the output feature map size is 56x56x64. Then do the local response normalization.
The second convolutional layer has a simplied inception architecture. There’s 64 1x1x64 convolution operations who generate 64 feature maps from the previous layer’s output before the 192 3x3x64(with step 2) convolutions take effect. Then again do the ReLU and local response normalization. Afterwards, there’s a 3x3 max pooling with step 2. Now, the output is 192 28x28 feature maps.
The third layer contains a complete inception module. The previous layer’s output is 28x28x192 and there will be 4 branches after that, the first branch uses 64 1x1 convolution kernels and ReLU, generating 28x28x64 feature map; the second branch uses 96 1x1 convolution kernels as the dimension reduction(with ReLU) before 128x3x3 convolution operation, generating 128x28x28 feature map; the third branch uses 16 1x1 conv. kernel as reduction(with ReLU) of 32x5x5 conv. operation, generating 32x28x28 feature map; the forth branch contains 3x3 max pooling layer and a 1x1 conv. operation, generating 32x28x28 feature maps. Concatenate the generated feature maps, you get a 256x28x28 feature map.
The so called forth layer is nothing but another inception module. Input is the output of the previous layer, 28x28x256. Still four branches, 1x1x128 and ReLU, 1x1x128 as reduce before 3x3x192 conv. op., 1x1x32 as reduce before 5x5x96 conv. op., 3x3 max pooling with padding 1 before 1x1x64. The output for the four branches are respectively: 28x28x128, 28x28x192, 28x28x96 and 28x28x64. The total result is 28x28x480.
The following layers has quite similar structure. The following two figures from the paper illustrates the whole network. I don’t think you can see the structure clearly here, so find that paper, page 6 and page 7.
About the “depth” in the first figure, it represents a layer’s depth, for Inception module, before conv. op., there are 1x1 conv. reduction op. so that the depth is 2, maxpooling depth is 0 and normal conv.’s depth is 1. In the next version of inception net, you can see the variations of inception module has a depth of 3.
For the second figure, there’s some intermediate output, that’s fine, according to the paper, some intermediate layer’s output also provides acceptable accuracy with less complexity of the overall structure. 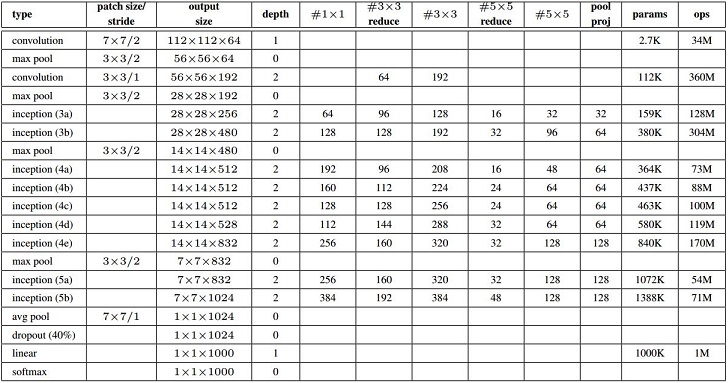 Figure2: GoogLeNet graph
Since this blog is too long to maintain and indexing, I’d better to start another blog for the papers afterwards.